With decades of experience producing historically significant shows in the art and music realm, John Morris and Kim Martindale have created a unique collection of art shows curated to create a unique art experience.

John Morris
Over 40 years ago, John Morris began his career as a show promoter and producer of landmark musical events in the U.S., Europe, and around the world. John was production manager at the original Woodstock Festival; opened and ran New York City’s landmark rock concert venue, The Fillmore East; and created and owned London’s first major rock concert venue, The Rainbow. John produced live concerts for bands including Paul McCartney’s Wings, The Grateful Dead, The Moody Blues, The Jefferson Airplane, Jimi Hendrix, The Doors, and Santana. Prior to co-producing The Santa Fe Show, John and Kim Martindale founded and co-produced The Antiquities Show in Santa Fe, which ran for 15 years. John has lived in the U.S., England, and the Caribbean.

With decades of experience producing historically significant shows in the art and music realm, John Morris and Kim Martindale have created a unique collection of art shows curated to create a unique art experience.

Kim Martindale
For four decades, Kim Martindale has produced some of the country's most prestigious and successful art shows. Immersed in the art world from an early age, he has brought his professionalism and enthusiasm to all areas of his work, which includes appraising, advising, buying, selling and gallery management along with art show development, promotion and management.

When Martindale was only 16 years old, he helped coordinate and implement the original and influential Santa Fe Antique American Indian Art Show (Whitehawk). After graduating from high school in 1979, his specific areas of interest led to intensive studies at various University of California campuses as well as universities in Iowa, Japan and Taiwan. Concurrently, he continued his education by getting hands-on experience working for Sotheby’s Los Angeles and Hong Kong.

His passions led to a succession of groundbreaking shows in Santa Fe, New Mexico, which he co-produced, including the Ethnographic Art Show, Winter Antiquities Show, the Summer Antiquities Show, and the Old West Show. Martindale’s credits also include the Tribal Art Show, held in association with the Denver Art Museum, and the Scottsdale Antiques and Fine Art Show, and ARTscottsdale, both in association with the Phoenix Art Museum and Art and Antiques Magazine. In California, he produced the Santa Monica Indian Art Show, as well as the San Francisco show, Ethnic Visions.

With California as his home base, Martindale recognized the growing influence Los Angeles was having on contemporary art and became a formative partner in establishing the official designation of January as Los Angeles Arts Month, thus creating a county-wide public and private partnership promoting all of the arts through every available media outreach. He is proud to be a past co-chair (with Ron Hartwig of the J. Paul Getty Trust) of the Los Angeles Arts Month Committee.

Martindale is currently the producer of the American Indian Art Show|Marin, which now celebrates over 30 years of success. For over 20 years, he has produced the spectacular LA Art Show at the Los Angeles Convention Center. Additionally, he co-produces (with John Morris) the Objects of Art Santa Fe Show, which combines contemporary and historic material including fine art, paintings, sculpture, furniture, books, posters, jewelry, textiles, and tribal folk art, as well as The Antique American Indian Art Show Santa Fe, both shows being held at El Museo Cultural de Santa Fe. New ventures include the acquisition of the San Francisco Tribal and Textile Art Show, a show with a long Bay area history—which will be a sister show to the Marin Show, now joined to create the San Francisco Tribal Week.

Martindale’s related credits include proprietorship of galleries in Santa Barbara, Ventura, and Venice, California and Santa Fe, New Mexico. His professional memberships include the Antique Tribal Arts Dealers Association, of which he is a founding and current Board member, and the Professional Show Managers Association (PSMA), where he is also a Board member. Martindale’s current gallery, K R Martindale Gallery in Venice, California, offers (by appointment) an eclectic mixture of ethnographic art with an emphasis on contemporary paintings, Native American, Latin and Asian art. 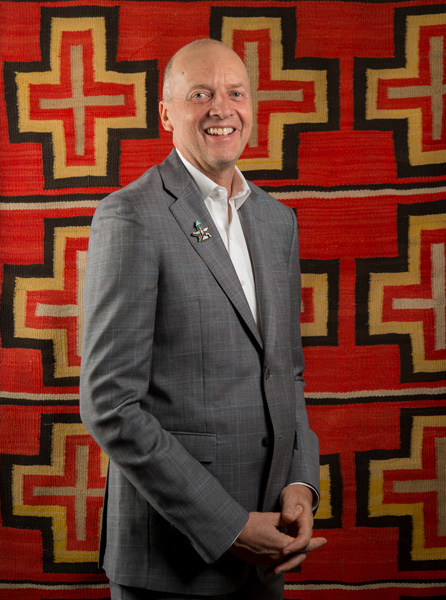